Before Star Trek, There was… FORBIDDEN PLANET! On Saturday, July 27th, Svengoolie showed  Forbidden Planet. The movie is a technologically savvy film that dared to take a look at future […]

Before Star Trek, There was… FORBIDDEN PLANET! 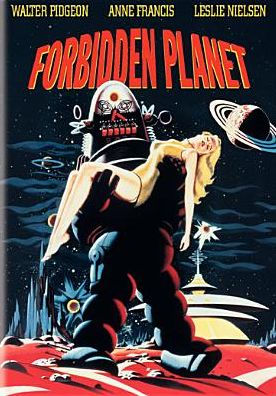 On Saturday, July 27th, Svengoolie showed  Forbidden Planet. The movie is a technologically savvy film that dared to take a look at future events.  I really enjoyed assessing the film’s ideas of modern culture and modern technology from today’s perspective. Within the first few minutes of FP you immediately realize that you’re watching the model on which the series Star Trek was based.  In opening scenes the handsome and swashbuckling Captain, played by Leslie Nielsen identifies his vessel as a member of the federation of planets. Ever heard that before? The ship on which they travel through the vastness of space has a good and well seasoned crew of officers and men. And science is their motivation, as they boldly go where no space crew has gone before.

Forbidden Planet also introduces us to the famed Robby the Robot. Robby has a whole back story to himself which will be covered in a future blog post.

Forbidden Planet touches on many things that challenge us today. Including the responsible use of advanced technology, artificial intelligence, ethics and human relationships.

One very interesting aspect was how Robby the Robot was programmed. Surely Asimov’s rules for robots played a part in how Robby’s part was written.

I won’t give away too much of the movie plot in this blog post. As it’s probably a foregone conclusion that most of our readers have seen Forbidden Planet. And if you have not seen it. I highly recommend that you do. Forbidden Planet is best viewed on a large formatted TV.  The film was designed to be viewed on a large theater screen. It’s deep colors, attention to detail, animation and large sweeping backgrounds look great on a high def T.V.