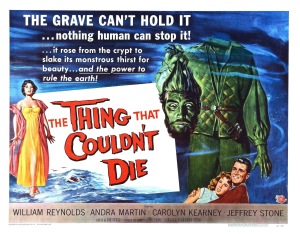 I had thought that being a ripe 60 year old a horror fan / monster kid, that I had seen nearly every horror film ever made. I also thought that I had been rather successful at sorting through most bad films made. That is until I had the unique pleasure of seeing the movie “The Thing That Couldn’t Die”.  In my opinion, “The Thing That Couldn’t die” COULD quite possibly the worst horror film ever made. How any movie could be worst than an Ed Wood production is truely perplexing.

According to Author Jeremy Lunt of IMDB;

A psychically gifted young woman discovers a centuries-old crate buried on her aunt’s ranch. Opening it, her family discovers the living head of Gideon Drew, a 16th century devil worshiper who was beheaded by Sir Francis Drake. – Written by Jeremy Lunt <durlinlunt@acadia.net>